SARS  commemorated the 75th Anniversary of the Normandy landings at our Beachy Head radio site operating under the special call sign GB2SF.

Following the important events that occurred in June 1944. SARS will be operating vintage equipment such as the Wireless Sets No.19 and WS62 as used during those times. We hope to contact stations in Normandy operated by members of the Vintage and Military ARS and others.   Please see   www.vmars.org

Our callsign for the event will be GB2SF after Sword Force which was the designation for troops that departed from Newhaven, Shoreham and nearby ports in the South East of England.

GB2SF will also operate a variety of equipment including Clansman VRC322 High Power HF station and VRC353 VHFs. Proposed Frequencies will be 3.615MHz using AM and 51.70MHz using FM. Operating schedules will be posted on the table below.

We look forward to contacting as many stations as possible. QSL cards and certificates will be available to stations operating vintage equipment and contacting our station on several different bands.

Beachy Head has special significance for D-Day, being the location of one of the new DECCA navigation system slave stations. The DECCA navigation system was a commercial rather than military venture, being employed by mine-sweepers and other path-finding vessels involved in the invasion. During June 1944 the  Master station “A” was established near Chichester, Slave stations “B” (Red) to the West near Swanage in Dorset and “C” (Green) positioned about a mile inland from Beachy Head. The system proved to give great accuracy, locating vessels within about 400 yards of planned positions, which for the technology of the day, was an outstanding performance. At this time the DECCA system was highly secret and only switched on just prior to the invasion. In order to confuse the Germans as to the actual landing area a decoy DECCA transmitter was also located on the Isle of Sheppey.

Prior to the beach landings the assault was preceded some 24,000 troops, landing by parachute or glider. Over 800 Douglas C-47 Skytrains (Dakotas) being the most important aircraft to support this airborne assault.  As the 75th anniversary event will probably be the last large commemoration of the D-Day landings “Daks over Normandy” are planning to fly thirty C-47 / DC3 to the UK and then Normandy. This will be between the 2nd-5th of June at Duxford and 5th- 9th June at Caen Carpiquet Airfields. Carpiquet being captured by the Luftwaffe in June 1940 and used by them as a base during the battle of Britain.

Around 250 men will parachute from the above aircraft over Normandy on the 6th June using WWII parachutes and in uniform similar to that of the period. When these aircraft fly from Duxford to Normandy it is likely we will be treated to a historic airborne spectacle that is unlikely to be repeated. .

The planned flight on the 5th of June from Duxford is Colchester,  Southend-on -sea, Maidstone & Eastbourne before heading to France and Caen Carpiquet.airfield in Normandy. Departure from Duxford is around 1340 UTC. Flight should be over Eastbourne around 1450 UTC.

Exercise Blue Ham 19-2 held by the Air Cadet forces and other military organisations has now been moved to the 16th & 17th of June. 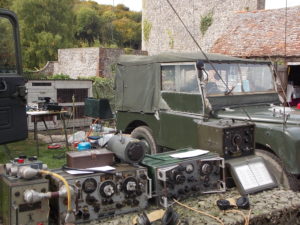 Some of the vintage radio equipment that will be used at Beachy Head during the D-Day event.

As can be seen from the above table SARS will be active on-air for the D-Day 75th anniversary and for the three days following this event. We will be active on 3.615MHz AM and 51.70 MHz FM using vintage equipment. Operations will also take place on many of the HF bands including 60m. We are really looking forward to contacting amateur stations throughout the UK Europe and further afield. Contacts with stations that have taken the time and trouble to restore WWII radios to operational condition are especially welcome. 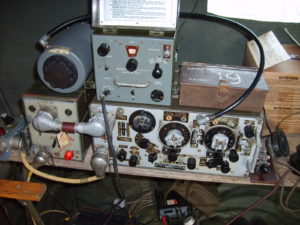 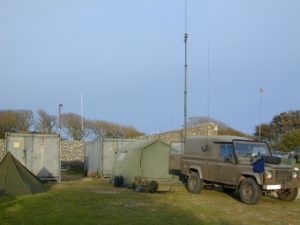 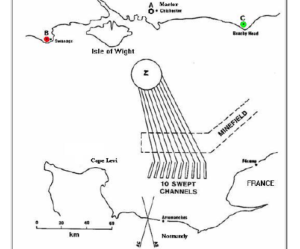 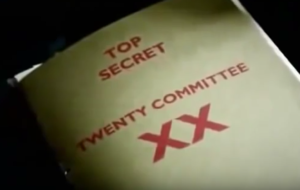 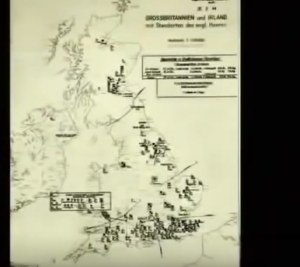 German Map showing positions of British and Allied forces as reported by double agents such as Garbo on D-Day.

The Germans expected the main force to land at Calais.

This is an event in which it is hoped that many of our membership will get involved or at the very least call GB2SF between the 6th and 9th of June. Members, their guests and friends are most welcome to visit our Beachy Head site during the above event. Members can use the forum thread to register their interest and exchange ideas for the D-Day 75th Anniversary. This is an occasion that will only happen once as it is unlikely that there will be any veterans of the day surviving in twenty five years time.

There will be a certificate available for stations who have worked us on at least three different bands and occasions over our operating period. This must include one AM  contact. Details will be given here after the event on how to submit your claim and download your certificate.